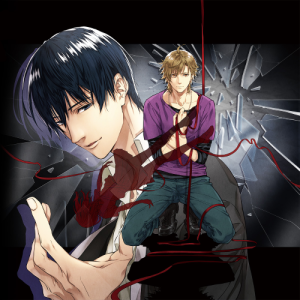 Just the warm light of the bedside lamp glowed dimly from the side. Amidst a world of vague contours, only the body billowing under me shined as though it was faintly luminescent.

“That’s fine, let’s lose ourselves together. Because I’ve lost my mind……a long time ago”

I wonder how long it’s been since I began indulging myself with her insides.

As I continued to stroke against her hot wet folds, I swelled close to the limit countless times but it was suppressed with willpower.

With the tip that surely had a vast amount of pre-cum leaking from it adhering closely to the entrance of her womb, I shook my hips time and time again.

My hips go numb from the strong sucking sensation as I move them. And the gulp down my throat echoed through.

As her little entrance clenched down tightly, the moment I thrust into her impulsively.

The narrow passageway tugged on my hips as if to pull them in and I rammed it inside her vigorously once more.

Unable to escape from the lingering feeling of climax, her body trembled while on the verge of fainting as I penetrated her deep again and again.

Wanting me to stop and conversely desiring me at the same timeーーher voice was enchantingly cute.

While apologizing, I couldn’t stop that from slipping from the tip of my tongue.

As I watched her approach the point of losing consciousness from panting excessively, it was about time I began thrusting again.

Although she was practically unconscious, in picking up my voice, she wrapped her legs around me.

And this sense of being accepted brought me close to tears.

Because I continuously held back, I continued to ejaculate for quite a while. And during that, I held her tightly and showered her with a rain of kisses. And I did so many times as if to convey the feelings overflowing from inside me.

That gentle voice gave me the sense that “it was conveyed”.

The eyes that were damp from tears brought on by pleasure, were mellow and narrow.

And as they peered at me, I smiled.

“I’m sorry, I don’t know if it’s my age but that one round ended up taking longer……”

As long as I freight an expression of remorse, in being kind, she would get a little flustered and hug me back.

“Don’t mind it. I’m happy to be joined for longer, plus…it felt good”

“Thank you. I’ll try my best to end it faster next time.”

“T-That isn’t something to work hard on right? So, err…Haruto, your pace is fine”

“Are you, really fine with my pace?”

As her tiny voice leaked out, I unconsciously moved my hips.

Even though I believed that nothing couldn’t be controlled with reason……in the face of her overflowing love, it heats up once again.

If I display a bitter smile to relay that it wasn’t purposeful, she’d respond with an affectionate smile.

“You’re too sweet to me”

“I’m not sweet. And that’s why I’ll be connected to you like this for the rest of your life, Haruto”

And suggestively narrowing her eyes while making that usually provocative statement.

As her vaginal folds moved to draw me in, I moaned freely.

“Sorry. Tonight, I’ve taken you as my own once more”

Even her retaliatory way of speaking is cute.

While licking and suckling on the tongue that stuck out with a slurp, intermingled with a rough breath, I whispered.

“……I’ll devote myself to you until the day I die.”

Because ever since the moment she forgave me, my hands, my feet, my very breath, all of itーーbelonged to her.

Feel free to link my translations but please don’t repost them especially on Youtube or claim them as your own.

*If you do see my translations on a Youtube video or elsewhere, please know that it is of no affiliation with me and no permission was given.