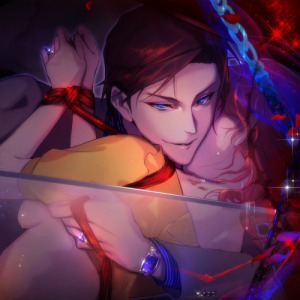 There is nothing that man can’t his hands on. Wealth, fame and perhaps even human life if he so wishes. ―― With a sense of awe and envy, that was what the man, Saijou Touji, was reputed to be.

But for his eight-year-old son, Hikaru, there came a time where that evaluation by public eyes was questioned.

Certainly, the face Touji keeps at work is perfect, and is respected by all his employees. Nevertheless, in the face of Hikaru’s mother, the man will immediately falter. A voice softer than that of which used towards anyone else, sulking and lowering his head to prostrate. Desperate to obtain the love of his wife, that appearance of his was rather pitiful.

His mother, no matter what the situation stayed composed and remained firm. It is not a story of physical prowess, but of character. There was an impression similar to that of a big age-old tree that had stood standing since the time of ancients and full with love and compassion.

That was what Hikaru thought. The public may fear Touji, but in reality, it was his mother who controlled the father often called an emperor, that was truly “frightening when angered”.

He became convinced of such after one particular night when he passed by the couple’s bedroom.

It was lonely sleeping by himself and so Hikaru planned to secretly sneak into his parent’s bed, however instead, he happened upon a sorrowful voice.

“Aahh…I’m begging you, forgive me”

The moment he heard, the first thought was that Touji must have kissed his mother one too many times. On the occasions where Touji would go for a kiss even public places, it would anger his mother.

Hikaru loved and looked up to his father, Touji, but even he thought it was best if his father fixed that lack of self-control of his.

Paying a little more attention, Hikaru noticed his father’s hand stroking his mother’s body. And not just that, the pair were half-naked.

Although mature for his age, he was still merely an 8 year old. Still ignorant in regards to sex, he could not understand the events unfolding before him.

Tilting his neck, through the gap between the door; watched the pair’s movements. Hikaru instinctively shuddered, when eventually Touji began to lick his mother’s legs. It was not an issue of whether the act itself was disgusting, but the brewing atmosphere created by Touji was unnerving and it frightened him.

And what was more frightening was his mother’s smile. Within that soft expression resided both compassion and cold hostility.

Touji looked at his mother with puppy eyes as she spoke.

“Will you forgive me?”

“Even if I don’t allow you, you’d still have sex with me all the same. So, go ahead. Do as you like”

His mother without the usual air of elegance befitting of a company president’s wife, had opened her legs in a suggestive manner.

Touji who was crazily ecstatic was then simply brought to despair.

“I don’t want to. I’m willing to say anything except those words, so no point in wasting your time”

The overwhelmingly kind look on the mother’s eyes……was completely different from the one directed towards Hikaru.

The eight-year-old Hikaru did not know how to react, but he had goosebumps all through his body, had shamefully wet himself.

No longer able to stay at that spot, the trembling Hikaru ran back into his own room.

He escaped back into his bed, hiding his head under the duvet whilst clutching his racing heart.

An inherited trait from his mother’s side, the weak-hearted Hikaru, began crying amidst the pain.

He repeated those words like a spell, slowly becoming sleepy and falling back into his dreams.

The next morning, his mother had the same usual smile, but Hikaru instinctively realized.

That his mother must’ve surely, done something to his father.

Feel free to link my translations, but please don’t repost them ESPECIALLY ON YOUTUBE or claim them as your own. Please DM me if you’d like re-translate anything.